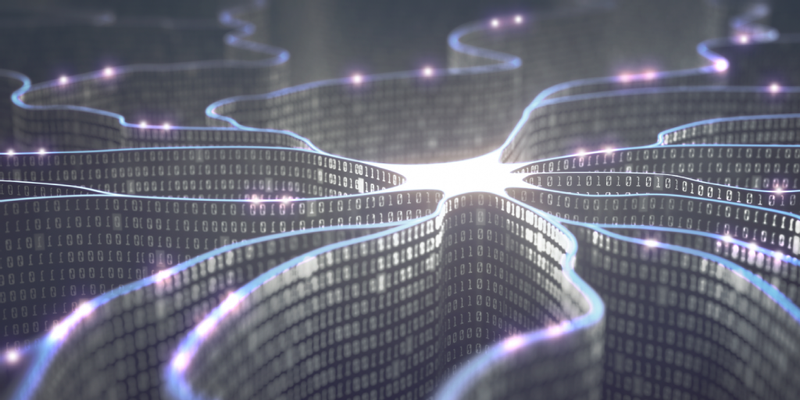 Why is there a Global Semiconductor Shortage?

With the onset of the pandemic, carmakers like General Motors, Ford Motor and Volkswagen were forced to temporarily shut down production lines. Anticipating a market slowdown that would last some months, they canceled orders for chips used in vehicle electronics systems like driver assistance and navigation control. Chip foundries like Taiwan Semiconductor Manufacturing Corp (TSMC) reassigned their spare production capacity for the remainder of that year to companies making smartphones, laptops and gaming devices, which were experiencing a surge in demand during the pandemic.


Unfortunately, auto manufacturers had incorrectly predicted the demand, only later realizing that people wanted more autos, not fewer. However, the supply of chips cannot be turned on and off instantly. Multibillion-dollar wafer fabrication plants are finely tuned and run 24/7, 365 days a year. Changing the production line for a new chip product can take weeks, if not months, and adding significant new wafer fabrication capacity can even take years and billions of dollars.

When car sales bounced back faster than expected in the third quarter last year and carmakers tried to ramp up production again, chip factories could not respond fast enough given the long lead times needed to schedule orders. By that time, there were no chips available for the auto industry.

This sent semiconductor supply into a downward spiral, creating a shortfall in the tiny electronics across a wide swath of industries. This shortage was exacerbated by “double booking” from chip buyers anxious to secure inventory, which itself was a consequence of supply chain uncertainty created by the US-China tech war. Added to the above were minor but accretive issues such as disruptions to chip plants following severe winter weather in Texas, fire at a Renesas chip fab in Japan in March, cobalt supply disruptions, etc. making the shortage a huge crippling factor.

How does this Shortage in Semiconductor Chips Affect Industry and Company Sentiment?

To better understand the trend in sentiment on an industry and company level, the Bitvore Cellenus® product was used to identify business sentiment from news flow and other sources of unstructured data. We prepared a portfolio of marquee players in the Semiconductors industry.

Fig 1 tracks sentiment scores for the selected Semis portfolio in the last year and has been segregated for APAC and US companies. As one could have predicted, the sentiment scores fell sharply, once in August 2020 to September 2020, when the US tightened trade restrictions on China, especially blacklisting Chinese networking giant Huawei. The drop in sentiment for APAC companies was sharper than it was for US companies. The second nosedive started in Q4 2020 (around mid-October 2020) and continued till mid-January 2021. Here again, APAC saw a sharper plunge, when compared to US. The correlating heatmap chart illustrates the flow of news for APAC companies since June 2020—notice the news flow was predominately focused on Product and Patents. This can be verified from the fact that APAC companies had been struggling since they could not continue producing the cutting-edge chips, since IP was held in US. 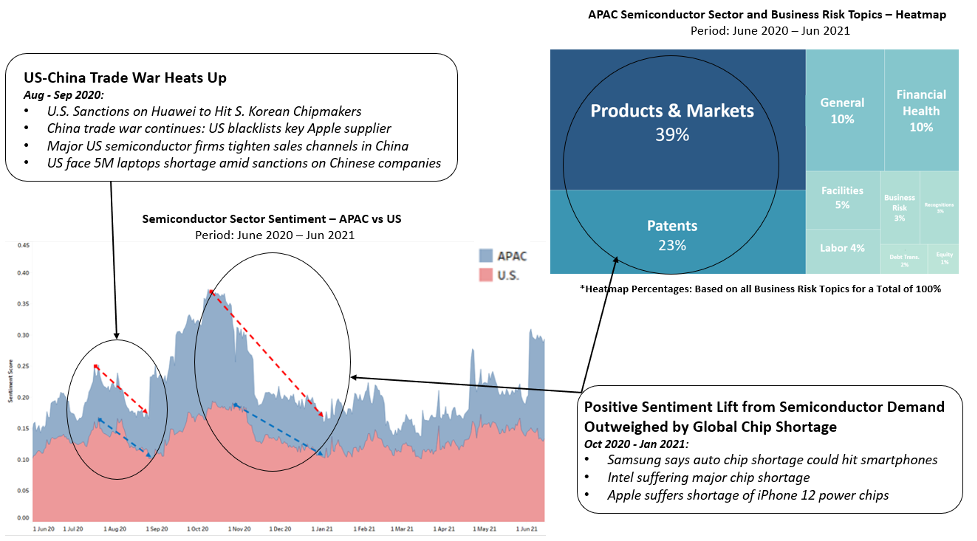 How has this Impacted the EV Industry?

The automotive industry has been forced to deal with these limitations and shortages. In April 2021, both Ford and General Motors said they would be shutting down production at several North American production facilities due to a lack of semiconductor chips. The shortage has also hit every other automaker, with some non-US manufacturers announcing production cuts, including Honda, Toyota, and Volkswagen. In Fig 2, where we have shown a 15-day rolling average of sentiment scores in the Semi and EV manufacturing industries, one can easily identify that the ups and downs in both the lines, are somewhat in tandem. 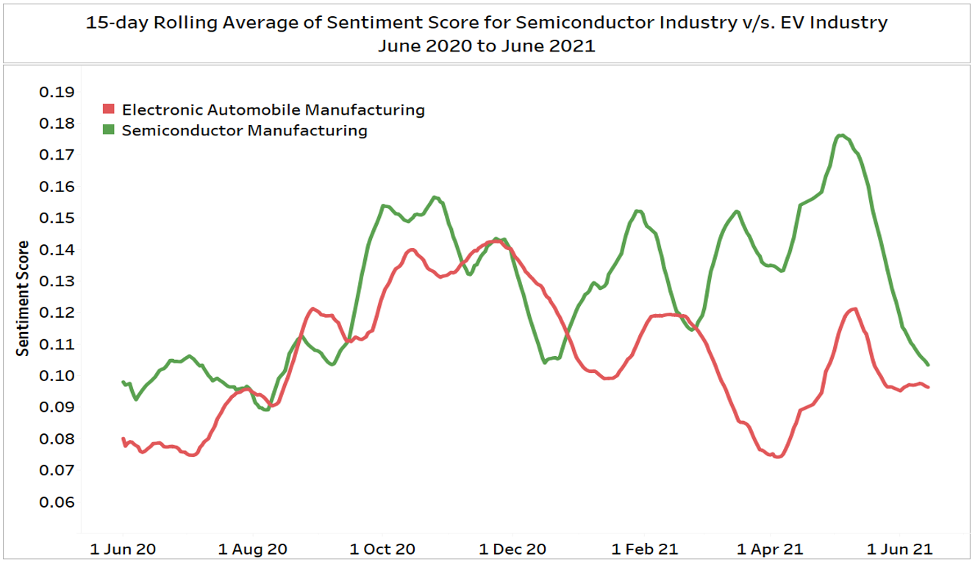 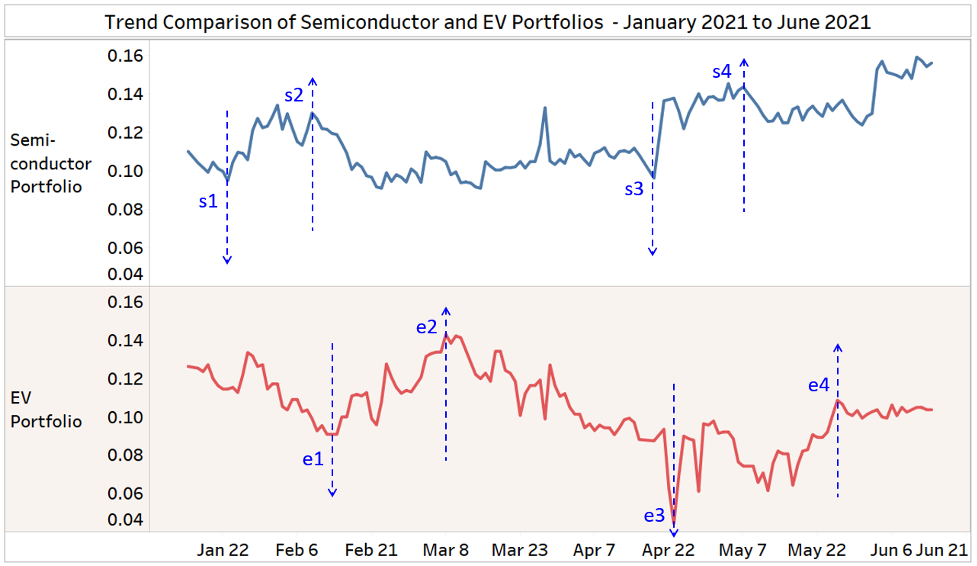 Likewise, in Fig 4, where we have a similar chart, but for Semiconductor Manufacturing and EV Manufacturing companies, the two troughs (s5 and e5) seem to follow a 5-6 week lag. And the peaks (s6 and e6), again show a lag (~2 weeks), but a shorter one. 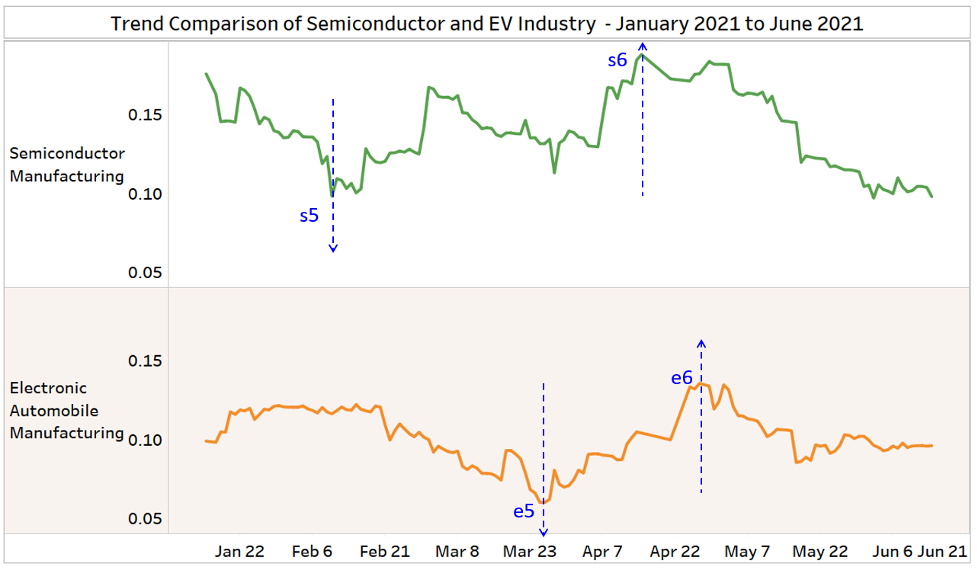 Given that the sentiment trends above were recorded during tumultuous times (i.e. COVID-19 pandemic, U.S. China trade restrictions), it is interesting to see how sentiment in the semiconductor industry affects the EV industry and to what degree. Will the EV industry become increasingly dependent on the semiconductor industry in the near term? It certainly appears so. Does the DATA suggest that Semiconductor sentiment is a LEADING indicator for EV sentiment? Yes, the EV sentiment appears to be affected by Semiconductor sentiment, highlighting the enormous potential of Bitvore’s data sets in converting unstructured data to actionable leading indicators of company, industry and market performance. 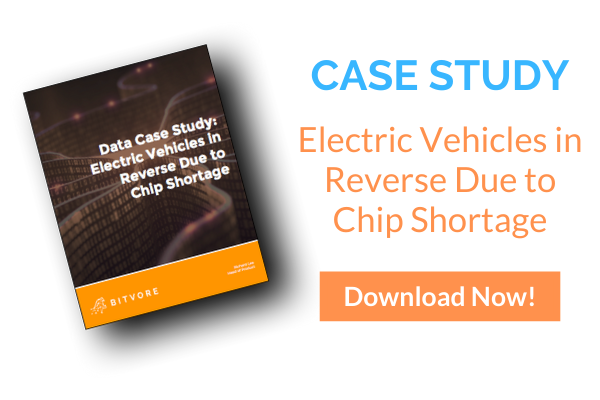