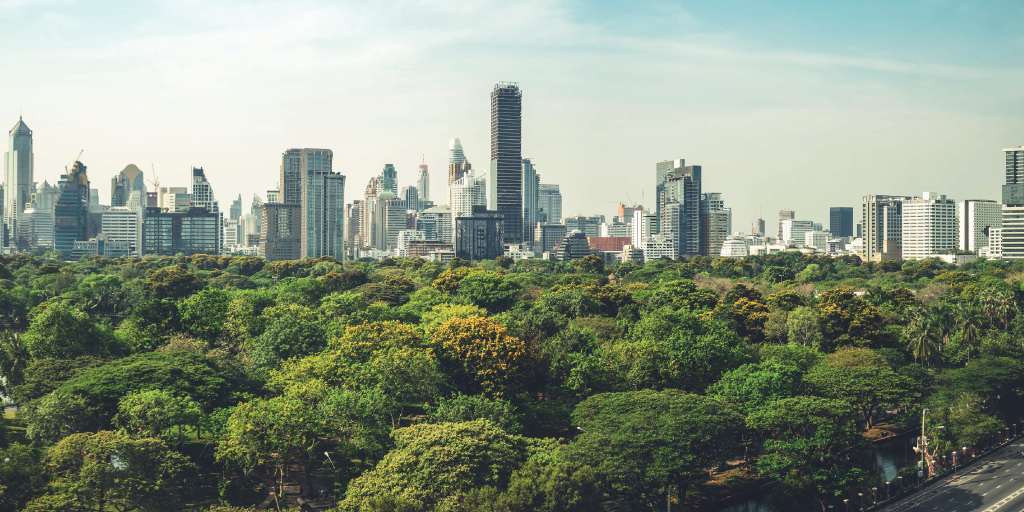 ESG has quickly become a tool to help investors see the trajectory of municipal bond obligors. Bitvore’s new ESG for Munis product allows customers to stay on top and keep track of their portfolios and how they are performing in terms of environment, social, or governance. In this case study, we look at how ESG for Munis allows us to track the move towards sustainability in New York.

The New Push Towards Sustainability within New York

New York’s initiative to become more sustainable has increased renewable projects throughout the state. The state’s new goal is to source 70% of its power from renewable resources. This goal has led them to require utility companies within the state to submit their plans on moving towards more sustainable energy. In July, the governor announced the state plans to look into green hydrogen to move towards removing carbon emissions. This new push also led the governor to sign a bill that requires 100% of in-state sales of new passenger vehicles to be zero-emission by 2035. 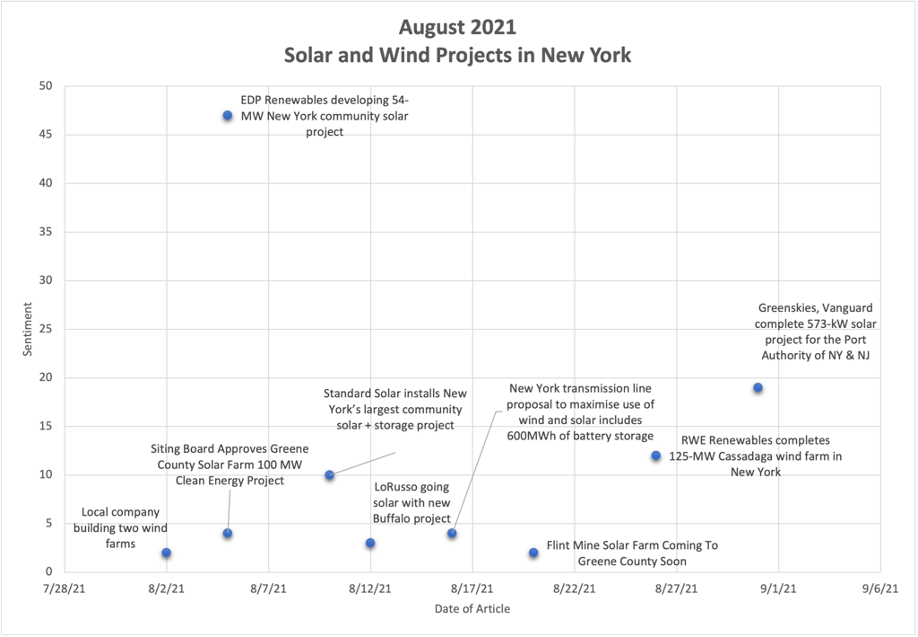 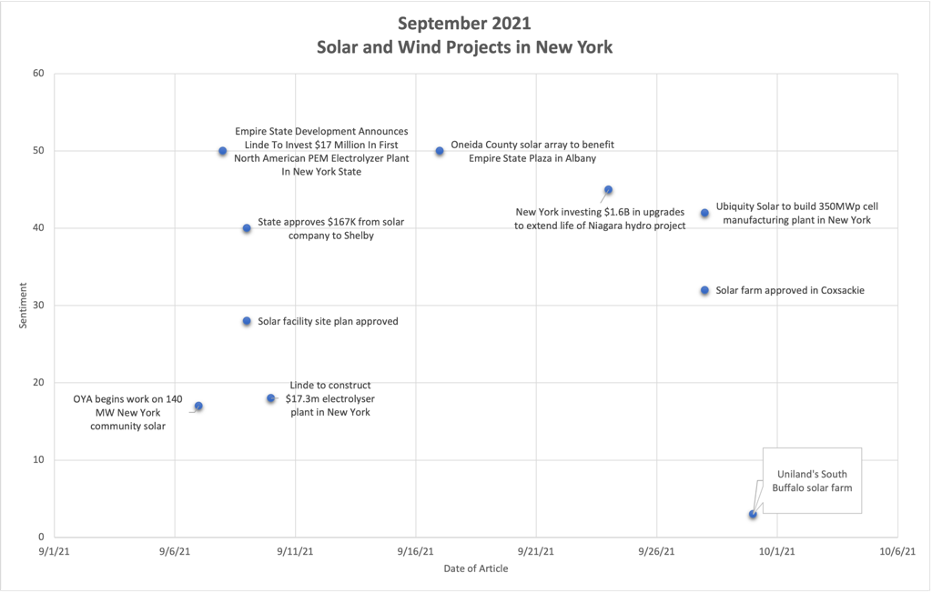 New Projects and Their Environmental Impact

Bitvore’s ESG for Munis tool can also be used to identify new projects and their potential effect on the environment. For example, the Champlain Hudson Power Express, a hydropower project based in Canada, which provides power to New York, threatens the natural environment in Canada, as noted by a coalition of Five Nations in Quebec. The alternative to the hydropower station would be an upgraded fossil fuel power plant, which poses other environmental effects such as “emitting more nitrogen oxide and carbon dioxide per unit of electricity than typical power facilities”. Tracking ESG significance can help determine the viability of new projects.

Switching gears from New York’s ongoing initiatives and potential environmental effects of new projects, we can now look at the push-back from municipalities and negative impacts on certain industries. For example, Copake, New York saw negative reactions when implementing green energy in the form of an anti-solar petition. Another conflict can be seen in the town of New Baltimore, concerning potential issues of implementing a new solar system array, in which a town planning board member stated, “the grid system is maxed out and the grid system will not support any more than maybe another megawatt in the area here within a 10-mile radius.”

Bitvore’s ESG for Munis tool also tracks a variety of municipalities outside of the utility sector, such as schools. The closure of the Indian Point nuclear power plant experienced several consequences within the natural gas sector, renewables, and a local school district. With the closure of this plant, it was estimated “fossil fuel plants in the metro New York City area would need to increase their output by as much as one-third.” With a combination of surveilling Bitvore’s daily alerts and our new ESG function, we were able to track the negative impacts of this plant closure, including a number of high-paying jobs lost, a decline in tax revenue, and the Hendrick Hudson School district losing out on $25 million dollars annually.

The graph below shows the projected nuclear output versus natural gas output following the closure of the Indian Point Power Plant. 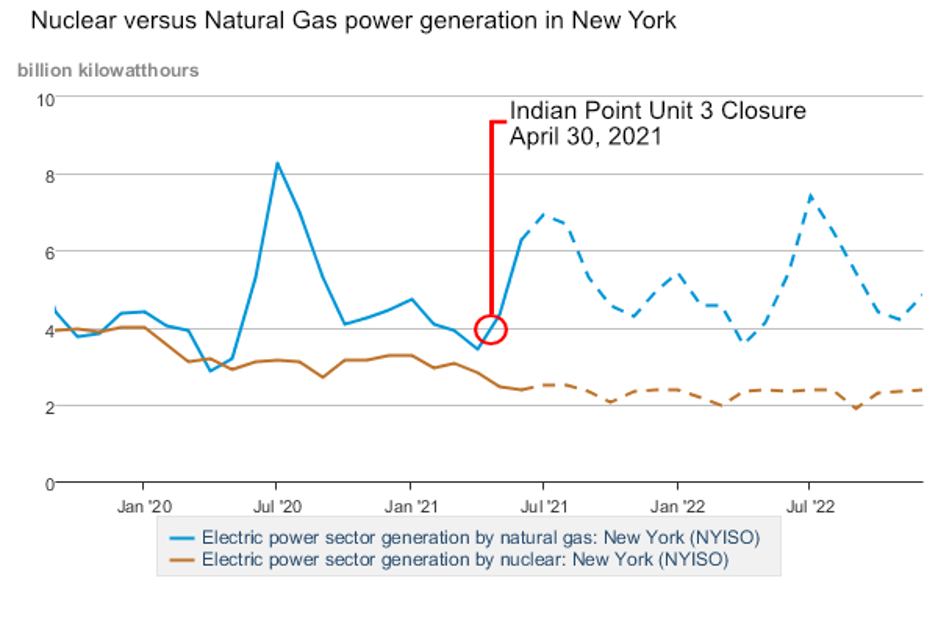 As seen in this case study, Bitvore’s ESG for Munis tool allows us to follow ESG trends in the municipal bond market by gathering data and following this new growth in sustainability projects across the state of New York. While this case study focuses on sustainability, ESG for Munis also tracks issues related to governance and social topics. Understanding the importance of ESG in the municipal bond market is key as more firms are prioritizing ESG disclosure from bond issuers. As the industry continues to evolve and prioritize these matters, we, at Bitvore, continue to use data to inform our customers. 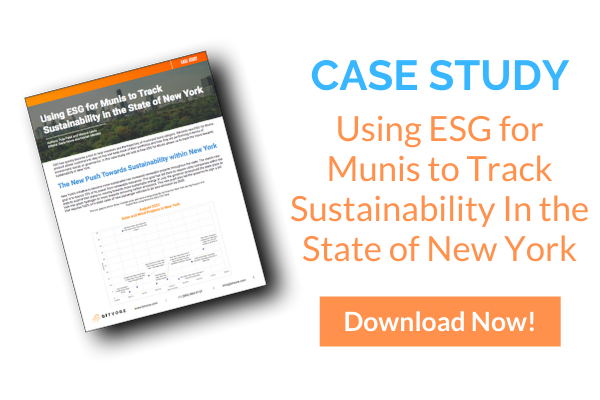