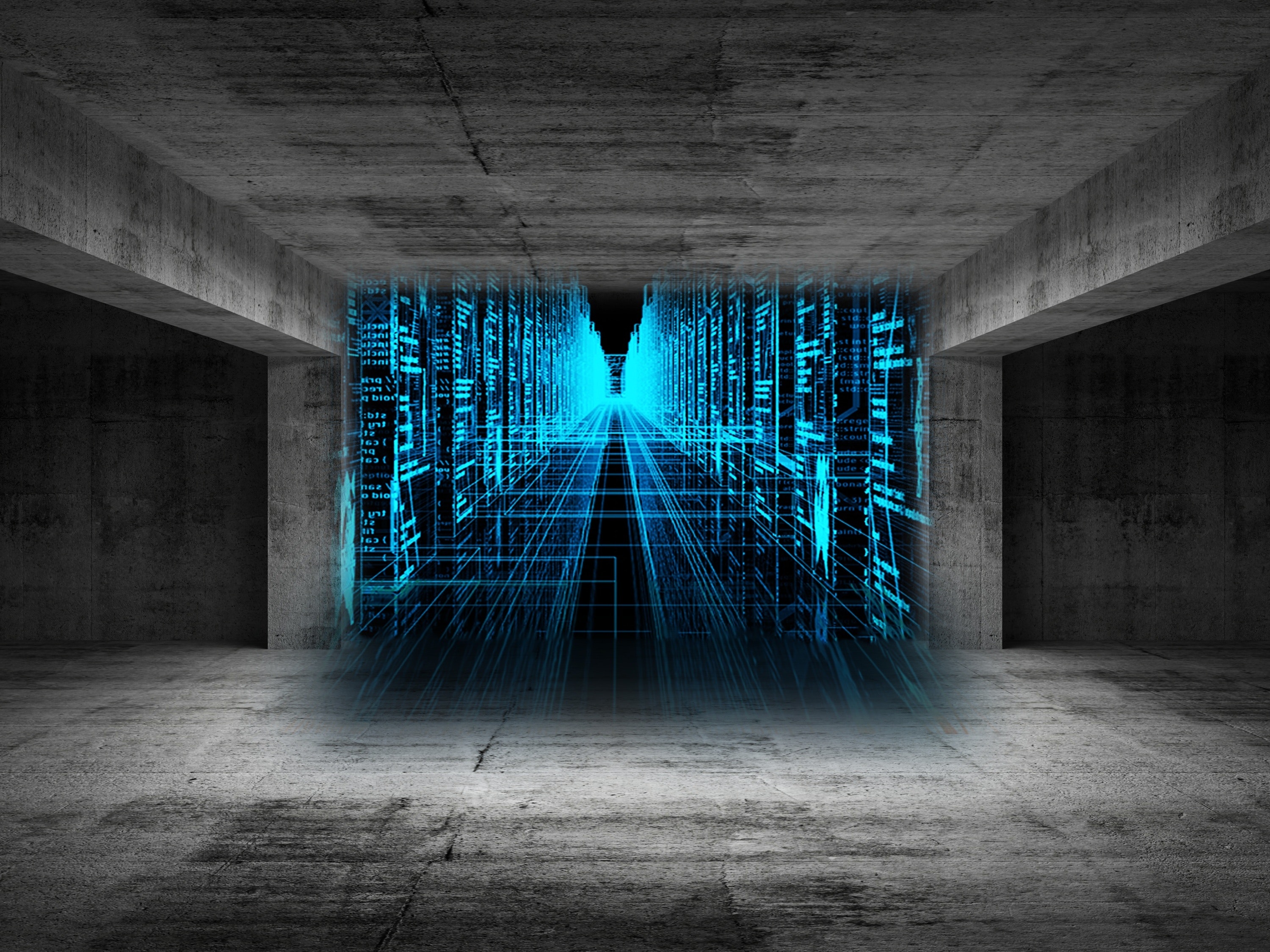 Bitvore has several years of data for the corporate market.  In 2017, we started collecting on a large-scale in earnest. As we’ve expanded our coverage by adding companies and backfilling data, we’ve been able to improve analysis on monthly, quarterly, and yearly trends.  Some of that analysis is very complex and some is quite simple.

For example, Bitvore has trained machine learning models to detect financially impactful events. We take the scoring these models provide and mash them up with the scoring of company extraction algorithms. Having a high degree of accuracy jointly identifying both a company and a signal in tandem results in high precision. We call the results of our analysis precision news for exactly that purpose. 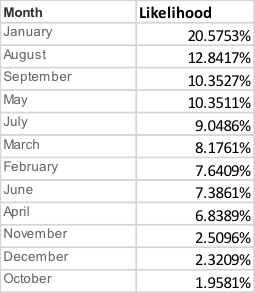 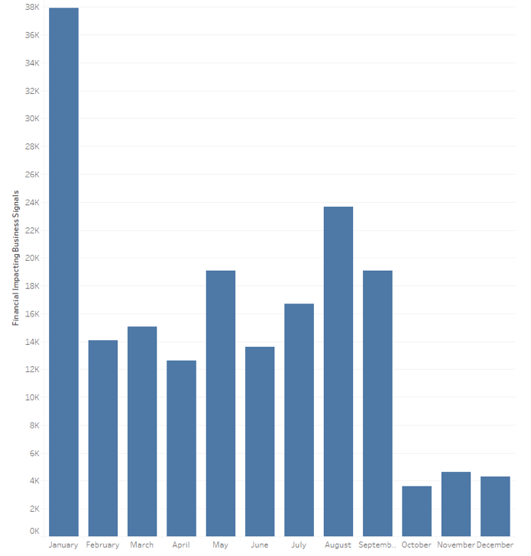 While this insight may be interesting, it’s not exactly useful.  Having a predictive model that says something impactful to a business is 10x more likely to occur in January instead of October, isn’t quite enough information to make much of a difference.  However, it might help you figure out when you should plan your Hawaiian vacation with the least likelihood of having to cancel it.

In order to get more useful results, we dug into the next level and looked at the top 32 corporate events in our system and mapped out the most likely events on a month-by-month basis. 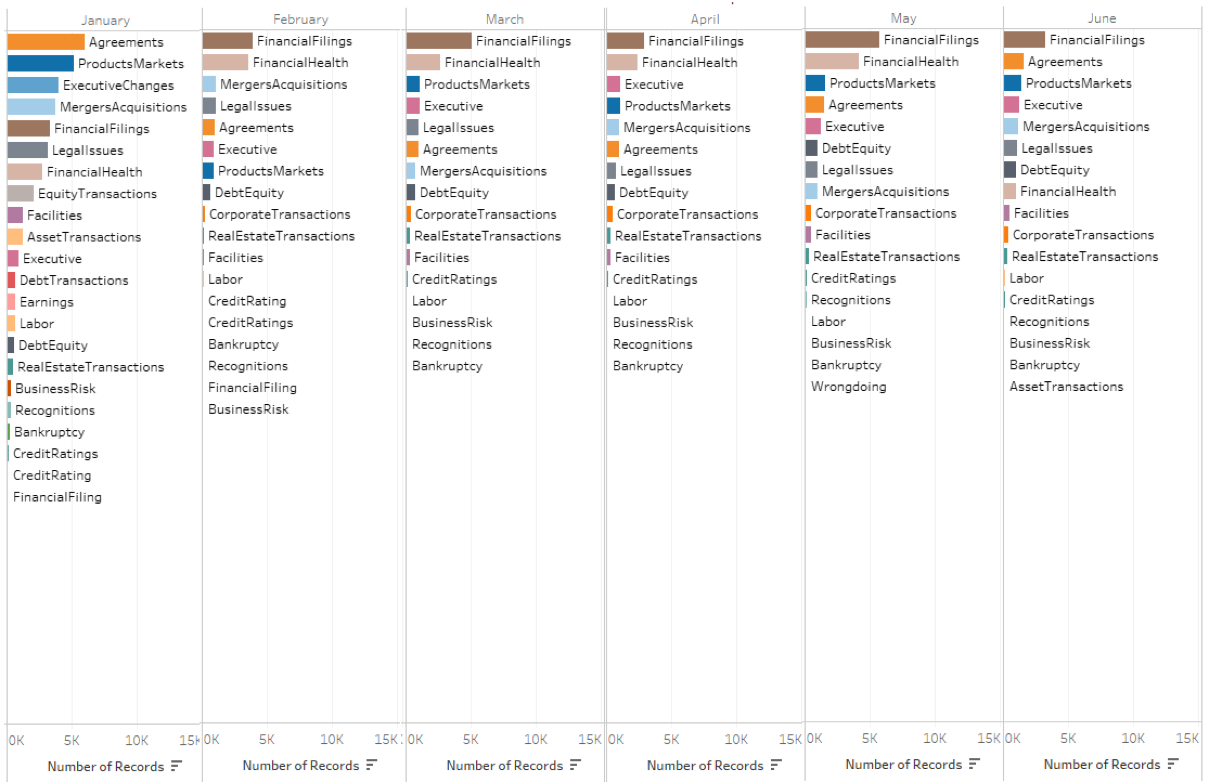 In January of every year there are a slew of agreements between companies, new product announcements, executive changes, mergers and acquisitions, financial filings, legal issues, concerns about financial health, equity transactions, and facility changes.  New products also tend to launch in March, May, and June (above) as well as in September (below).  Executive changes and lawsuits seem to occur most in the doldrums of summer months.  Concern for financial health builds throughout the first half of the year, leading to a spike in agreements in September.  The year finishes out with merger & acquisition activity. 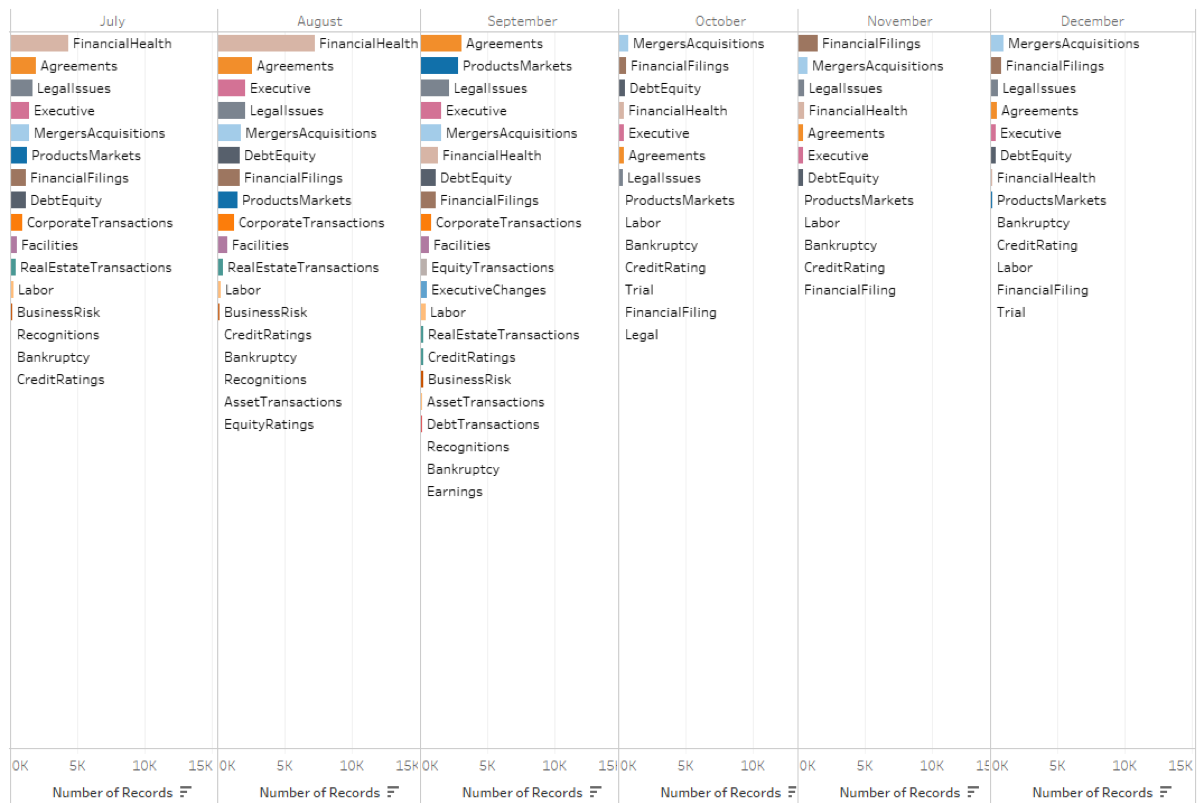 Here’s where it starts to get interesting.  For each signal, we can calculate the likelihood of an increase or decrease in signals for that particular month. In the general market case, this can add some predictive value, but it’s nowhere near enough to figure out if a certain company is more or less likely to have a certain signal within N-months with M-probability.   In the real world, we still have to rule out seasonal trends, systemic patterns, random noise, serial dependencies, and other factors.  Once these things are accounted for, we can auto-correlate lag.  Lag is simply the amount of time where one thing (or a number of things) happens before something else does.  This can be something like consistently poor financial health leads to an increase in the changes of a bankruptcy signal over some amount of months.  Another situation is some number of executive changes or too many product launches can lead to an increased likelihood of legal issues or financial health problems.

At Bitvore, we take the data points in the system and perform time and dependency analysis on them by industry, company, geography, and other factors.  The more data points we have and the more precise our tags are for identifying situations, the more accurate our analysis can be.  Luckily Bitvore has over 1.4 billion records in the system available for analysis, and an arsenal of machine learning models to extract values out of the content.  The ability to baseline patterns in the data when combined with time series analysis, helps us determine an increased or decreased likelihood that another one of Bitvore’s signals will happen within an industry, geography, or possibly within a company.  Being able to figure out if something will happen at a company, such as raising money, executives leaving, new product launches, or settling lawsuits, potentially even before the company knows, is one of the promises of big data + machine learning.   We’re going to keep building on both of those promises.